2014 was the year Nimble Elearning was formally introduced to the world as it was launched at the Learning Technologies event in London. Conceived five years earlier as Elearning247, the brainchild of Neil Hyde and Joe Jarlett, it quickly turned into a game changer in the online learning industry. It aimed to empower trainers and L&D personnel to take control of their own online training.

Cast your mind back to 2014. The year when supermarkets launched do-it-yourself checkouts as retail introduced greater levels of automation to increase efficiency. It was when smart watches became the latest must-have accessory too, a computer strapped to your wrist felt like science fiction that had become reality. In 2014 five million smart watches were sold, this year it’s likely to be nineteen million.

Back in those days, the traditional culture was to commission courses from elearning experts – instructional designers. This new platform planned to hand the process over to the content providers, the people with the original knowledge, to let them create the courses themselves. A vision to ‘take away the middle-man’, to increase accuracy, reduce time, reduce costs and remove a lot of the frustration too.

And it has proved to be a huge success. Early adopters were National Security Inspectorate, UK Atomic Energy Authority and National Nuclear Laboratories; these organisations remain customers today. They have been joined by over 250 more, as a new organisation comes on board each week. 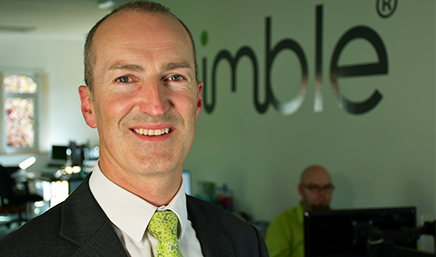 As any father might say of their offspring, Neil Hyde, Managing Director of Nimble, is proud of the company’s achievements: “Nimble has been used so effectively by hundreds of companies to enrich their training programmes. We love being able to support our customers in the way we do and feel we’re only just getting started!”

One factor that has maintained this success is the variety of customers who use the Nimble platform. They range from large commercial organisations with thousands of learners to individual entrepreneurs who want to produce their own professional resources whilst monetising their efforts. For some, despite the intuitive ease-of-use of the platform, the free support provided by the Nimble team remains another factor in the company’s growth. Another game changer is the Nimble Success Programme. Nimble work alongside their customers, understanding how Nimble can help them achieve their business goals and provide valuable tools and advice to ensure they reach them.

Neil is optimistic about Nimble’s growth. “In little over five years our customers have seen nearly three million of their courses completed. We’re super proud that our approachable platform has been able to support so many people.”

It’s inevitable this success means Neil and his team are ambitious for their five-year old. Not wishing to rest on their laurels, plans are afoot to strengthen the product further – its infrastructure and the support they provide. Their customers also have a wonderful opportunity to meet up with each other at the annual Nimble Community Day on 19 September. You might say they’ll be attending Nimble’s fifth birthday party… though there’s no guarantee of jelly and ice cream, there will be a lot of people celebrating.

Subscribe to our weekly newsletter below and never miss the latest product or an exclusive offer.

Get all our articles, guides, and whitepapers straight to your inbox

This website uses cookies to improve your experience while you navigate through the website. Out of these, the cookies that are categorized as necessary are stored on your browser as they are essential for the working of basic functionalities of the website. We also use third-party cookies that help us analyze and understand how you use this website. These cookies will be stored in your browser only with your consent. You also have the option to opt-out of these cookies. But opting out of some of these cookies may affect your browsing experience.
Necessary Always Enabled
Necessary cookies are absolutely essential for the website to function properly. This category only includes cookies that ensures basic functionalities and security features of the website. These cookies do not store any personal information.
Non-necessary
Any cookies that may not be particularly necessary for the website to function and is used specifically to collect user personal data via analytics, ads, other embedded contents are termed as non-necessary cookies. It is mandatory to procure user consent prior to running these cookies on your website.
SAVE & ACCEPT