Would you know how to recognise a victim of modern slavery?

According to latest reports in 2020 from The Centre for Social Justice (CSJ) and the Justice & Care Charity, based on police evidence, we can accurately estimate there are at least 100,000 people kept in slave-like conditions across the UK, which dwarfs the 10,000 working figure estimated by a government study in 2017.

In fact, one of the largest offenders of modern slavery is the UK, with reported cases increasing across many industries, including agriculture, construction, hospitality and manufacturing. The issue is likely to intensify in the wake of the coronavirus pandemic and is already costing the UK taxpayer many billions of pounds.

It’s every organisation’s ethical responsibility to ensure managers and employees can identify the characteristics of modern slavery and ensure they remain compliant with the Modern Day Slavery Act 2015.

Our Modern Slavery elearning course looks at the extent of modern slavery in the UK; how to spot the signs of a victim; what to watch out for as an employer and how to report concerns to ensure vulnerable people are identified and supported. 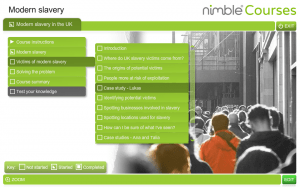 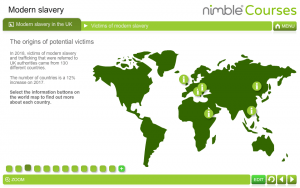 A screenshot of an interactive map in the Modern Slavery course.

After completing this course, learners will be able to:

View a demo of the course now: https://www.nimblecourses.com/modern-slavery-demo

By visiting our website and completing our enquiry form, we will collect and process the following data about you: We may also use the Google AdWords remarketing service to advertise on third party websites (including Google) to previous visitors to our site. This could be in the form of an advertisement on the Google search results page, or a site in the Google Display Network. Any data collected in this way will be used in accordance with Google’s privacy policy, and you can set preferences for how Google advertises to you using the Google Advertisements Preferences page. We maintain consistently high standards in our use and storage of personal data, and comply with the EU General Data Protection Regulation (GDPR) and other relevant legislation. Please read our Nimble Elearning Privacy Policy for more information.
Close
X
X
By using this site you agree to the use of cookies for analytics. Find out more Ok
Privacy & Cookies Policy
Necessary Always Enabled